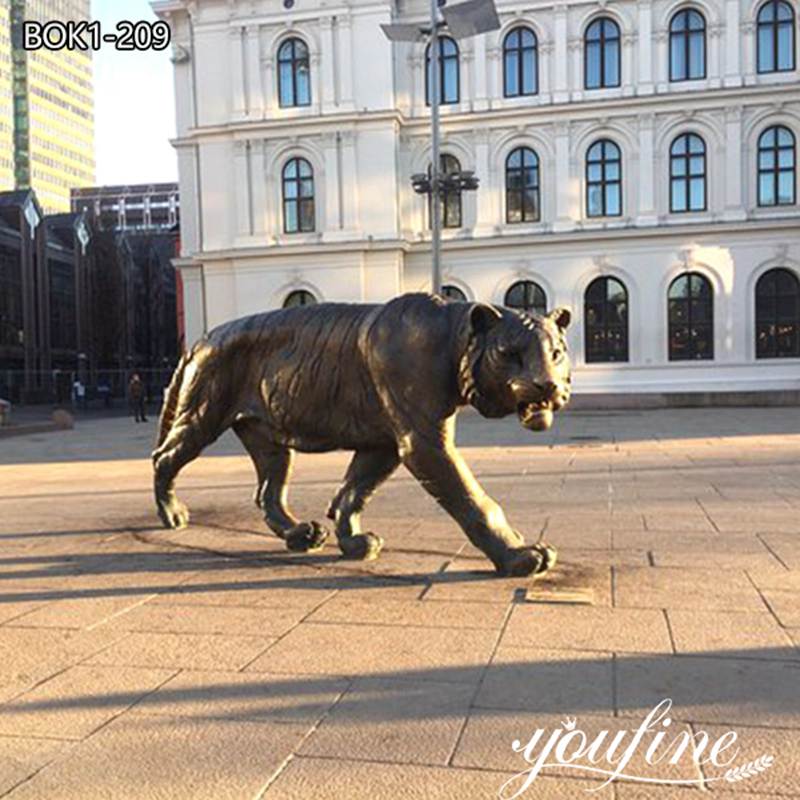 In people's cognition, the tiger is the symbol of the king. Therefore, many people like to cast tiger sculptures. If you like this tiger sculpture, please contact us immediately. YouFine would cast a real live tiger sculpture for you.
Item No: BOK1-209
Size: Customized Size
Material: Bronze Patina
Insurance: Cover All the Risk
Package: Strong Wooden Case
Service: Customize Acceptably
Advantage: Factory Direct, Door to Door Delivery

This life-size tiger statue is located in central Oslo, Norway. Although tigers are not one of the species of Norway’s native fauna. But the size of this sculpture and its lifelike appearance would really shock everyone. Especially children like to climb on the tiger’s back and play.

Plus, there’s always a steady stream of people who want to take pictures with this tiger. We could clearly see the tiger as if it is still alive. In people’s cognition, the tiger is a very ferocious animal. Especially when they always have terrifying teeth in their mouths. But the tiger is also the symbol of the king, so many people like to cast tiger sculptures. YouFine would cast a real live life-size tiger statue for you.

One Of The Largest Cats In The World:

The Siberian tiger is one of the largest cats in the world. Also, they originated in Northeast Asia and were once distributed in Russia, Siberia, and South Korea. Known as the Siberian tiger in China, it has an evolutionary history of 3 million years. Although the tiger is huge, its strength is amazing. But Siberian tigers are still endangered in the wild. And, the survival of this rare species is at stake. Carlos A. Driscoll in a 2009 paper on the relationship between Caspian and Siberian tigers in the journal Science. Among them, genetic studies have shown that the Siberian tiger and the extinct Caspian tiger are close relatives of other tiger subspecies.

And, the common ancestor of the two tigers may have reached Central Asia via the ancient Chinese Silk Road about 10,000 years ago. Moreover, they settled in the Caspian region. One of them crossed Siberia to the Far East and formed the Siberian tiger population. Human activity is thought to have separated bronze tigers from the same species in different regions. and lead them to different evolutionary paths. The findings have sparked speculation about the reintroduction of tigers to Central Asia. Habitat surveys are also underway in the Amu Darya and Ili deltas. If this idea is realized, tigers would be seen again on the ancient Silk Road. Therefore, Siberian tiger sculptures are also very popular.

Siberian tigers are usually solitary, with males and females living together only during the breeding season. Therefore, they do not have fixed nests and mostly wander the mountains for food. They could also swim. Remote areas in the past have developed into villages due to forest development and population explosion. Therefore, tigers often forage near forest settlements. Tigers are active at dusk, dormant during the day and seldom go out. Tigers have a wider range of activities, and their foraging activities in the north could reach tens of kilometers a day. They hunt by lying down or sneaking to a certain distance. The tiger then pounces on the animal’s neck when it sees its prey. No doubt, this way the prey could not escape. Tigers also eat berries and large insects in the fall.

What Is The Meaning Of The Tiger Statue?

Tiger, as a symbol of ancient animals, is a symbol of dignity, ferocity, sternness, and courage. Moreover, the tiger statue also serves as a symbol of protection. Therefore, the image of the tiger often appears on clothes or in the home. These are symbolic to prevent any apparent harm and ensure that the finances are well kept. Animals have incredible power in all cultures. Therefore, people use the characteristics of each creature to represent the power they wish to have in their lives. Generally, tiger statues serve as omens of wealth, good luck, etc.

In some parts of China and Asia, tiger sculptures are regarded as the god of wealth. Therefore, the Chinese God of Wealth is depicted sitting on a tiger. Such an image symbolizes the supremacy of invisible power. And our ability to harness the power of tigers in our lives.

The tiger statue is considered to be the king of beasts and it represents powerful energy. Asian legends believe that tigers are the protectors of the dead. And tigers are often seen in graves as a symbol of protection, ensuring peace of mind for the deceased. In addition, the tiger is also considered a solar animal. Therefore, they are often associated with the symbols of the sun, summer, and fire. In ancient Chinese mythology, there are five tigers who maintain the balance of cosmic forces and prevent chaos from collapsing into the universe.

The Five Tigers Are:

White Tiger: Ruler of Autumn and Ruler of Metal Elements

Black Tiger: Ruler of Winter and Ruler of the Water Elemental

Blue Tiger: Ruler of Spring and Ruler of the Earth Elements

Red Tiger: Ruler of Summer and Ruler of Fire Elements

Yellow Tiger: The supreme ruler of all these tigers and the symbol of the sun

Where should the tiger statue be placed in the house?

It is believed that placing the white tiger on the right side of the house brings wealth and good luck. And this placement is most likely related to the compass direction of the west. Tigers could protect your home from all negative energies. Do you feel intimidated by the mention of tigers? You are afraid that it would suddenly attack you. Looking at our bronze Siberian tiger sculpture, it opens its mouth wide, as if it really wants to eat people. But don’t worry, it won’t eat you. Our bronze life-size tiger statue is very detailed, just like a real tiger.