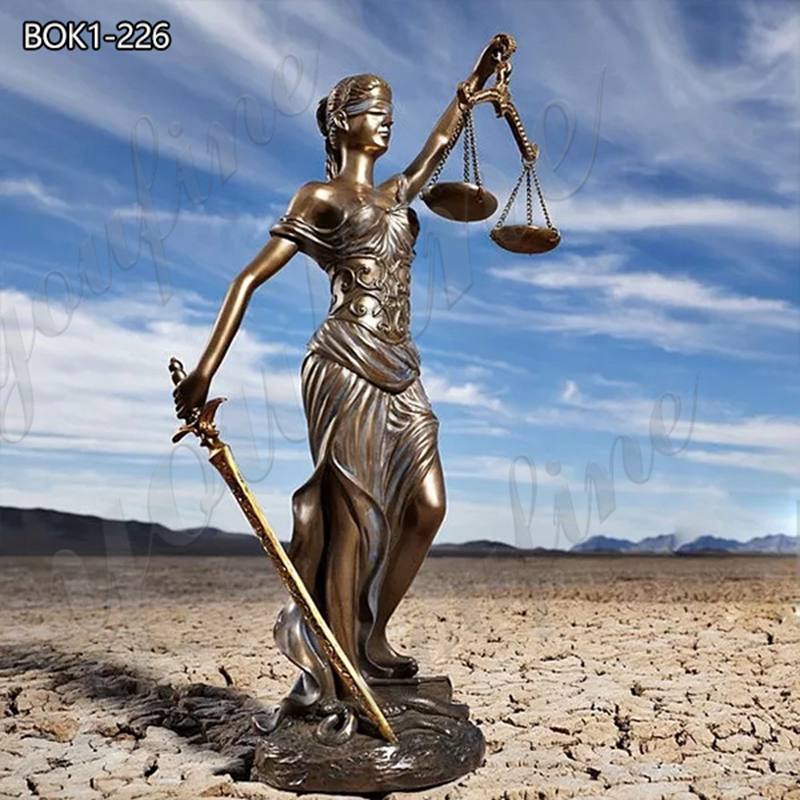 We could clearly see that the YouFine bronze lady justice statue is so delicate, especially the blind lady justice statue skirt is very elegant. There are various decorations on the skirt to give people a visual impact. The goddess of justice wears a blindfold. And she holds a double-edged sword in her right hand, with scales ranging from her left. Especially, the colors of our sculptures are very bright. This is because our artists use a chemical coloring method, which ensures that the color of the sculpture becomes more and more natural.

Artists at the YouFine factory used the traditional lost wax method to cast the bronze lady justice statue. What we know best is that these particular traditional techniques have been around for five thousand years. Then, there is no doubt that our artists have fully mastered this particular technique. And, the artists at the YouFine factory have innovated this technological innovation. Among them, we use silica sol technology. This method helps ensure that the statue looks beautiful. Especially the top antique bronze statue, which has been used for a long time, there would be no white spots on the surface of the sculpture. As a new result, YouFine’s lady justice statue for sale could have a long-term aesthetic.

What does the Statue of Justice Mean?

The Goddess of Justice is the allegorical personification of moral power in the judicial system. Her attributes are scales, a sword, and sometimes a blindfold. The goddess of justice is based on the Greek goddess Themis – who was revered as having a keen eye – and the Roman goddess Justicia – who was revered as the virtue of justice. She was blindfolded. Because justice is impartial and should not be based on a person’s appearance or other outside influences. The goddess of justice originates from the incarnation of justice in ancient Roman art called Iustitia or Justitia, equivalent to the Greek goddess Dike.

Why was the Lady Justice blindfolded?

First, the blindfold covering the eyes of the goddess of justice represents the concept of justice. The idea of ​​justice is crucial in the legal system. Because it shows that justice should be applied in all circumstances. Second, the scale of justice expresses the weight of evidence for and against an issue in order for justice to be given. And, judges should weigh and consider before issuing a ruling. Finally, the sword represents a sense of authority and power. Therefore, justice could be done quickly and in a final way.

What is the Statue of the Goddess of Justice?

Why is the Goddess of Justice Called This?

The goddess of justice could be traced all the way back to the Egyptian goddess Matt (or Maat) and the ancient Greek goddesses Themis and Dick (or dice). This should come as no surprise, as Matt symbolizes Egypt’s ideology of balance, harmony, justice, law, and order. Themis stands for fairness, law, and order. Dike embodies fair judgment and moral order. Since then, versions of the Goddess of Justice holding up the scales of justice have been seen in various remodels in many countries.

Also, YouFine has been engaged in bronze classical sculpture for 39 years. Our artists have extraordinary casting skills and vast experience. Please feel free to contact us if you are interested in this sculpture.