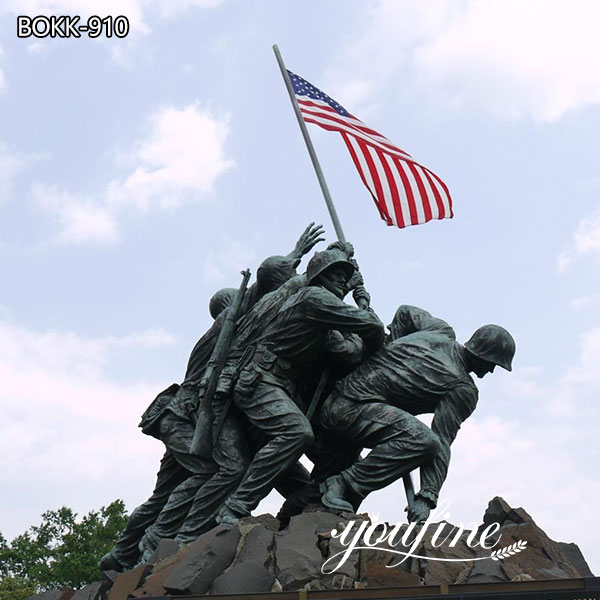 This large bronze monument statue is located in Arlington County, Virginia. YouFine can cast marine corps statues for sale for you. This sculpture commemorates members of the United States Marine Corps. The corps was established in 1775 and finally died in the battle of Iwo Jima to defend the United States. The name of the sculpture is the US Marine Corps Memorial. The sculpture is inspired by Jos Rosenthal’s iconic World War II photo. It depicts six men holding the American flag on the Suribaki Mountain on Iwo Jima. 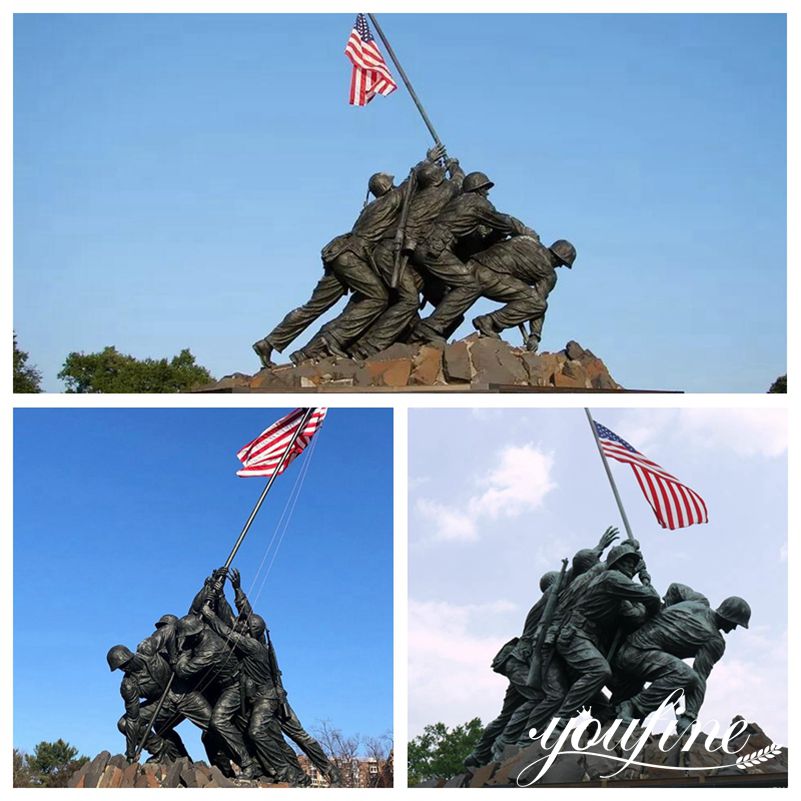 This large bronze monument statue commemorates the soldiers who died in the war. And their patriotic spirit and feelings. With their bodies, these soldiers have always maintained the national flag. The sculpture sculpts every soldier’s movements and applications very delicately and vividly as if bringing us into the picture of war. 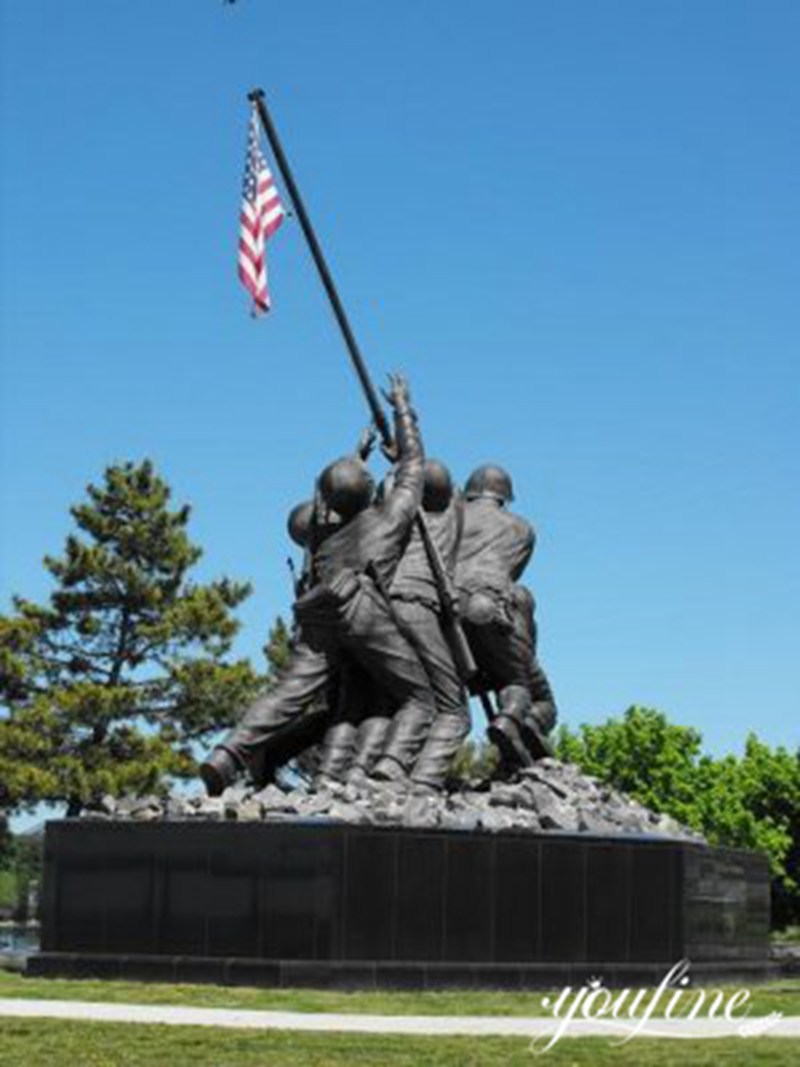 What is the Marine Corps Statue Called?

The famous U.S. Marine Corps War Memorial is located close to Arlington National Cemetery. And, this monument pays tribute to the heroes of the Marine Corps since the American Revolutionary War. In addition, the list of fallen soldiers is engraved on the base of the sculpture. Also, the marine corps statues are about 10 meters high. One of the military sculptures depicts the scene of the U.S. Marines who landed on Iwo Jima during World War II, and they experienced tragic battles. But finally, stick to the moment when the American flag is inserted into the black granite underfoot. 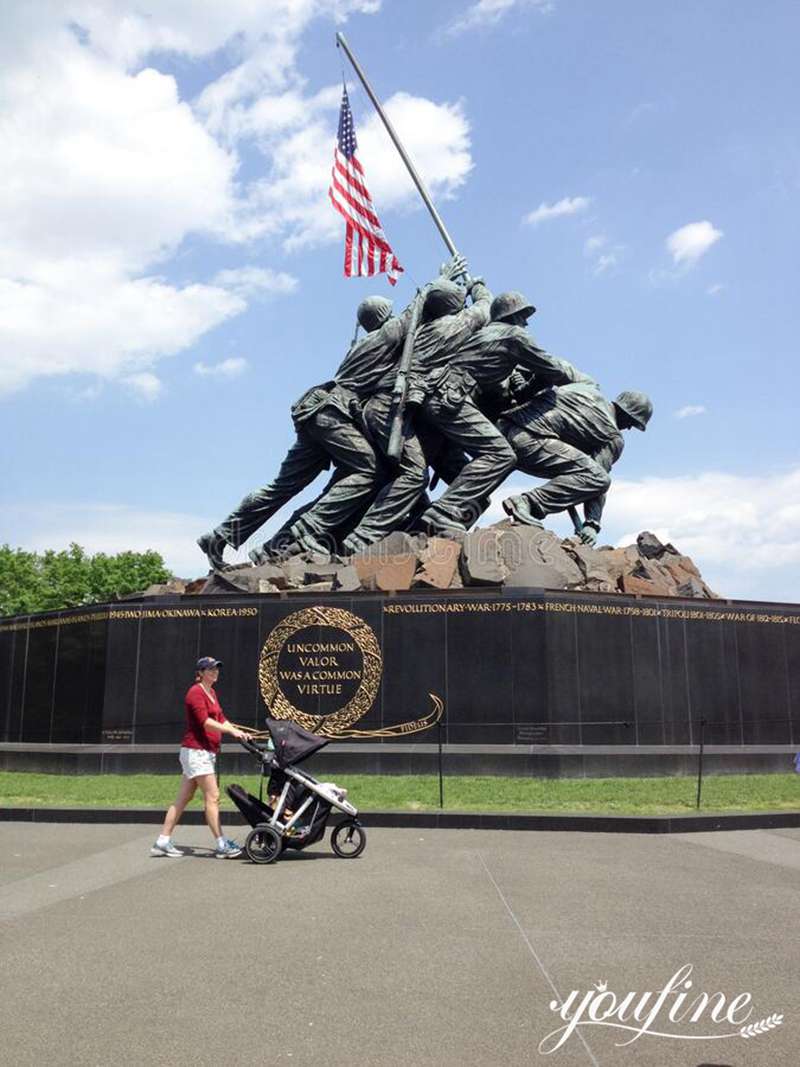 We could clearly see that the figures of these statues are very realistic. They were cast exactly in the original details of the photo. In addition, the image of this group of sculptures is like a reproduction of a battlefield. So when you look at this statue, you could smell the smoke of the battlefield. Also, you could hear the roar of guns. Of course, we seem to see blood, flesh, sacrifice, and victory. The base of the sculpture is made of black Swedish granite similar to the black volcanic ash of Iwo Jima. Undoubtedly, this also shows the originality of the designer. 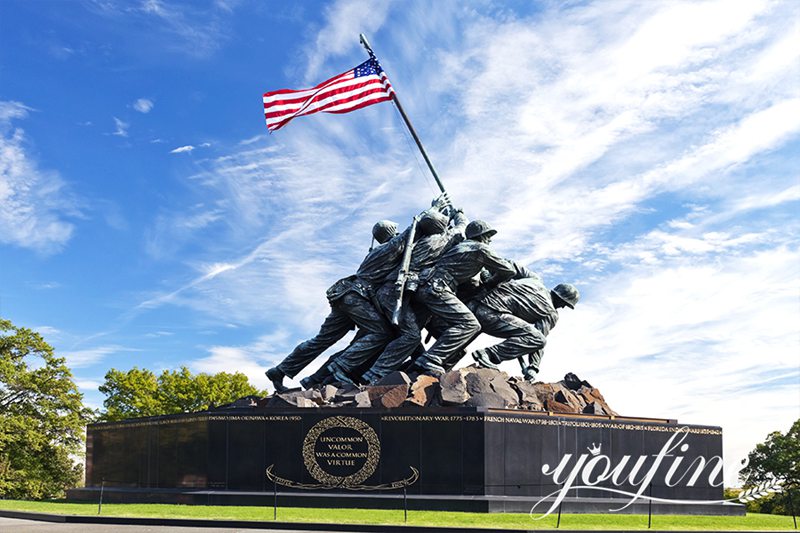 How Many Marines are in the Iwo Jima statue?

The Iwo Jima statue depicts six marines. This military group sculpture was cast from a field photograph. And, after the photo was published, it caused a sensation in the United States. Moreover, this scene greatly inspired the pride and patriotism of Americans. As a result, President Roosevelt had ordered the six fighters in the picture to be brought back. But unfortunately, three of the six were killed in battle. So. The image shown in the photos and sculptures has now condensed into a spirit of American heroism, so many people and organizations choose to cast marine corps statues to express their patriotism. 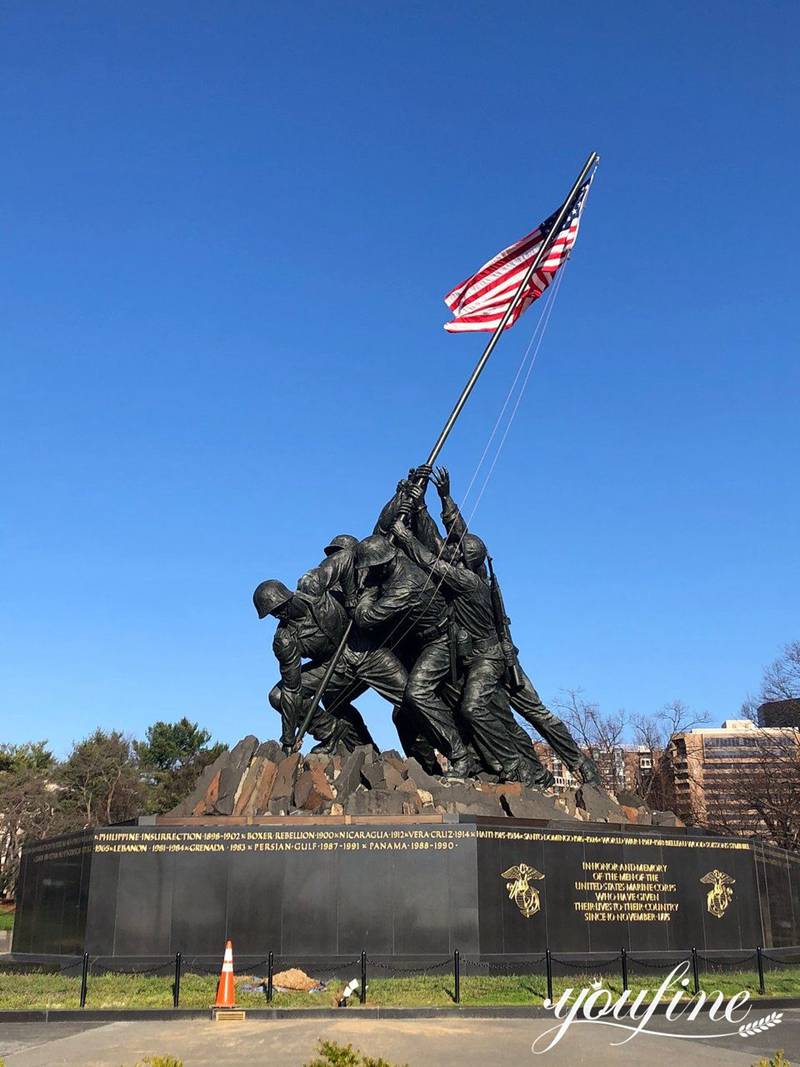 Flags of Our Fathers Movie:

We all know that the bronze marine corps statues are located on the edge of Arlington National Cemetery in Rosslyn, Virginia. The bronze statue is based on a famous World War II photo of Marines raising the American flag on Iwo Jima. The famous photo was also referenced in a promotional poster for the American film Flags of Our Fathers. 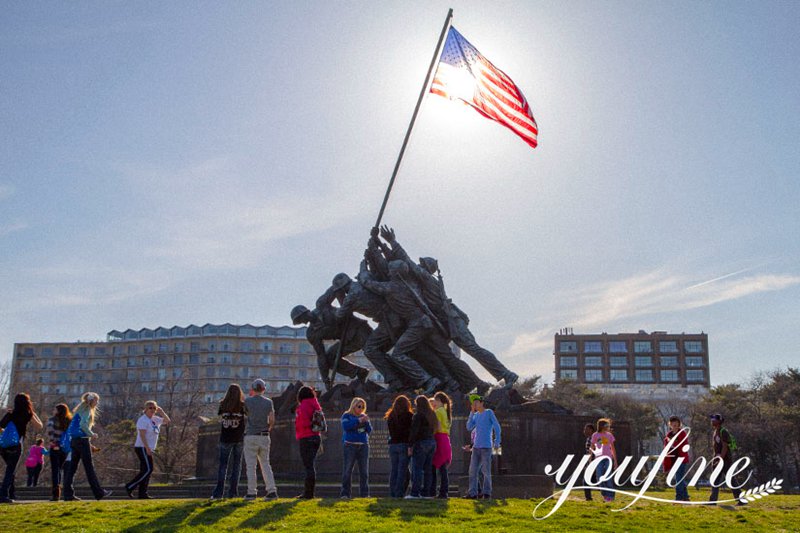 This photo was taken by Associated Press war correspondent Joe Rosenthal. Also, the 1945 Pulitzer Prizes were awarded for the historic photo on February 23, 1945. The cast of the sculpture is Felix DeWolden. He was born in Vienna, Austria. He later enlisted in the Navy during World War II and became a field artist at Naval Air Station Maryland. 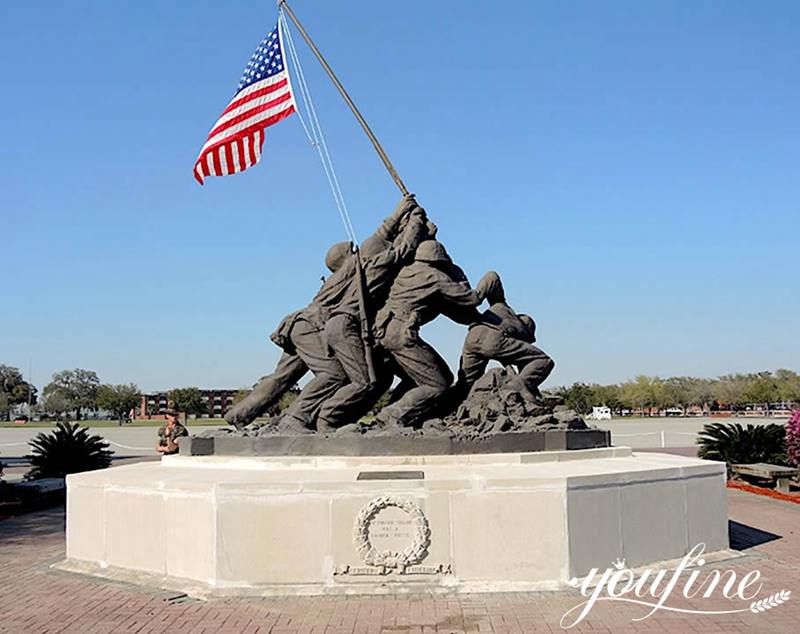 You Fine will use the traditional lost wax method to cast this entire bronze monument statue. And You Fine has adopted the latest silica sol casting process, which can greatly improve the quality of sculptures. The sculpture can be for a longer period of time, even if it is for many years, it will not produce white spots. However, the traditional ammonia process cannot achieve this effect. 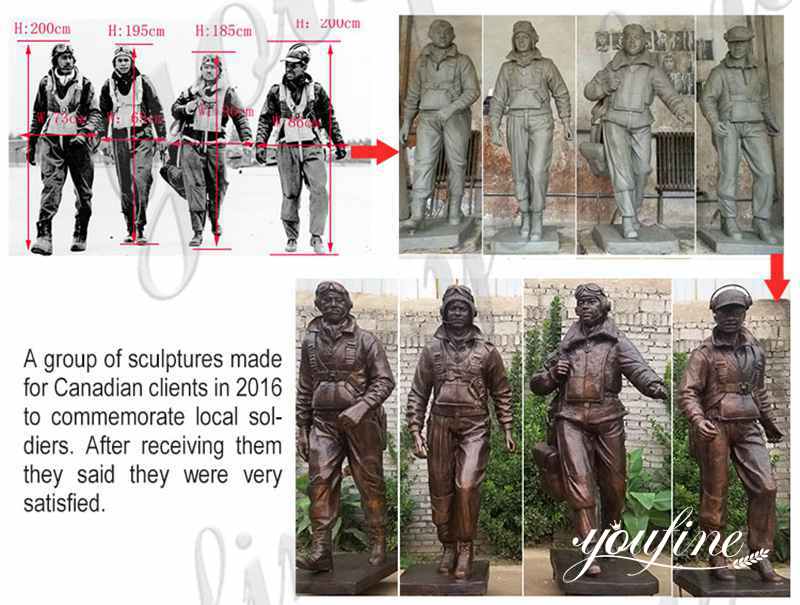 Here at You Fine, You would find a series of exquisite bronze military statues to commemorate the veteran or serviceman. And we offer military awards and collectibles, statues, monuments, and custom sculptures. Our unique soldier statues would capture the spirit of the army. And respect the services they provide to our country. Whether you choose to give them as a gift or add them to your collection, you would find that each statue is the epitome of elegance and honor. 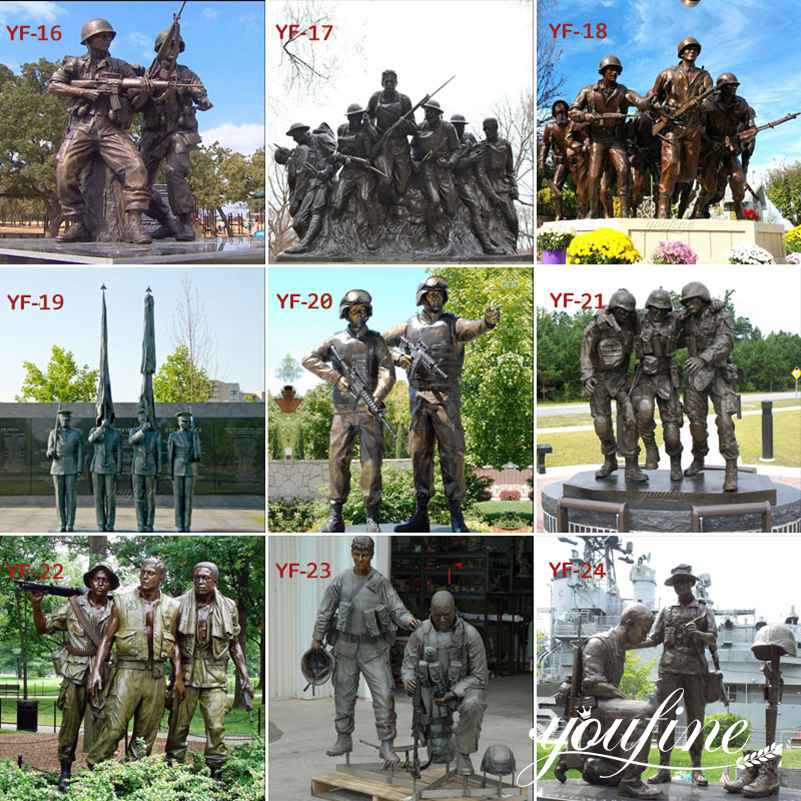 As a professional factory, You Fine can make any large bronze monument statues for you. At the same time, You Fine also accept customized projects. Please feel free to contact us for details of the sculpture.

We will buy full insurance to make sure the sculpture smoothly arrive at your location. 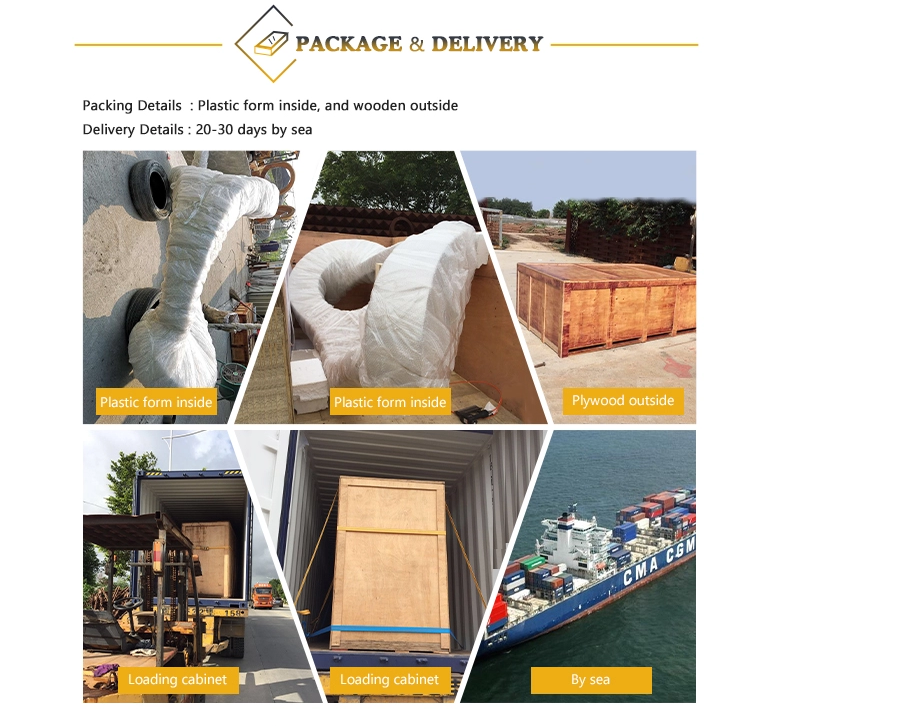 You Fine Art Sculpture could provide the best service for the whole process of bronze sculpture’s production. Whether it’s from the initial stages of design to imposition, or from product delivery to final installation. Our work staff would take every carefully crafted product.

Our services could be partially included or completely. Each of the participants involved in the production of sculpture, including our experienced bronze craftsmen, and the talented sales people who interact with our customers, professional artists and designers. Would do their best to meet your sculptural design requirements.